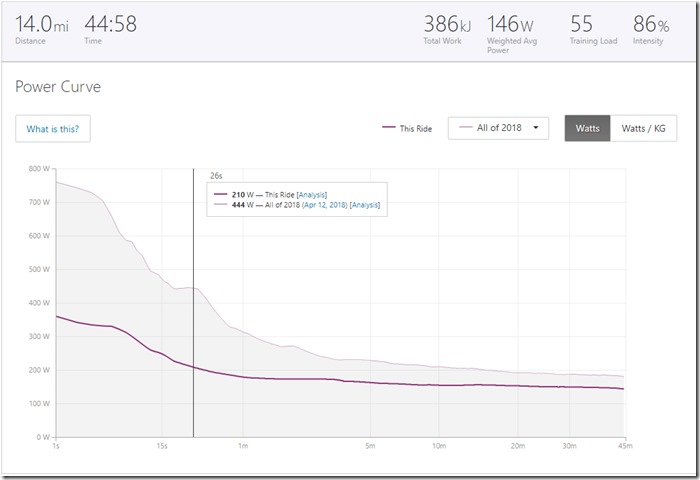 The Bike that Goes Nowhere

I’ll have to chalk this one up to “one of those days” and move on.  No sense overthinking it.

Our good friend Jim, who is a meticulous gadget nut, has been electrifying tricycles for a number of years now.  He has experimented with different tricycles, motors and battery setups. A few weeks ago I had the pleasure of driving his latest creation and it was zippy.  It was fun to drive.  I’d say ride, but with a motor and a throttle, it’s as much a vehicle as a cycle.  The idea of tooling around in a tricycle has been growing on my wife.  She never rode as a child and just does not feel stable on a bicycle.  I’m sure she is thinking it would be fun to keep up with me easily at whatever pace and even to zoom by from time to time.   I’m not sold on recumbents or tricycles for myself, but for Ellen?  Score 1 for a trike.

Jim and I have a similar problem to solve: we have motorhomes and do not want to tow a vehicle. What is the best alternative to towing a car that lets us and our wives tool around once the motorhome is parked?  Electric trikes fit the bill.  They are easily charged, many models fold, and they can go on trails that cars just cannot.   I could put a rack at the back of our RV for my bicycle and a trike for Ellen, no problem.  Jim has been researching tandem trikes and found a fellow in Germany who makes a tandem in low volume production.  He actually flew to Germany to test ride one before ordering.  It comes with a motor, though Jim declined that option and will build his own!

Yesterday, Jim & Cyn visited a local tricycle dealer to test drive a few and I tagged along.  I know next to nothing about tricycles and I have not kept up with bicycle components/accessories since I got my Trek in 1996.  ( I love my Trek.) I must say I was impressed with Catrike’s designs.  I chose not to test ride one; it would be for Ellen and it’s her opinion that would matter.  Then too, I might actually like it! (then what?) The way the Catrike folds makes it easy to transport and perfect for our RV.  It might even fit in the under bed compartment or in the shower! That would be awesome.  In any event carrying a trike and my bicycle would solve our local travel/toad problem.  Score another for a trike.

A portion of the bay trail, a paved path that winds around San Francisco Bay, that connects Hercules with Pinole and Richmond is nearing completion.   When completed, this will give us a beautiful, long bicycle path and an alternative to the Peloton for exercise.  With Ellen on an electric assisted tricycle, she will be able to keep up if I power through a few miles of hard cycling.  That will be great for her and for me.  Score another.

All four of us will go back to “our” Catrike dealer this Thursday to do some more test riding and (I suspect) color selection.   I only see one drawback with my Trek vs Ellen’s soon to be trike: dirt and gravel roads.  I have narrow Kevlar belted racing tires that are virtually indestructible, but they do not do well on gravel and with no suspension I’d be rattled to death at speed on dirt.  If we stick to paved paths I