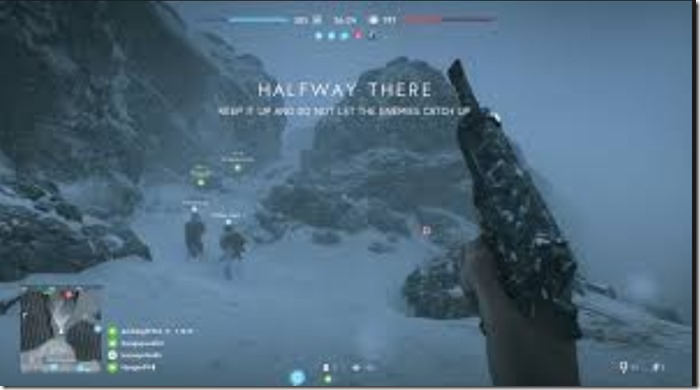 I am not a “gamer”.  I enjoy the challenge of mastering a first person shooter game.  That can take days or months. Often I’d be at it practically all day and night for a while.  Eventually I’ll feel proficient and put the game down for a while: months or more typically years.  That’s me, work hard to “master” something then move on.  I’ve always played against a friend or family member one-on-one or played with a number of bots.

Battlefield V feels different.  It has the draw of the first person shooter game (FPS), but much more.  I’ve started playing battlefield games with 16-32 other players and “graduated” to 64 other players.  No two games are similar. Perhaps the most fascinating aspect of this “game” is the teamwork the framework encourages, perhaps even requires.  To be effective a squad of 4 players must work together.  All players can resuscitate  a downed comrade before he/she bleeds out.  A medic does this much faster.  To keep the squad functional, the medic needs to stay close to the group.  Resuscitation is extremely well done.  There is some significant interaction between the avatars of the two players.  The first time I recovered, I felt a bond with my savior.  It was palpable.

Then too the avatars cover racial and gender. Without knowing it, the first time I selected the medic class I spawned as a woman.  What a surprise when my avatar spoke.  This game can help break down boundaries between races and sex as people work together toward a common goal.

The goal is not to shoot anything that moves.  The goal is to capture and keep objectives.  This does necessitate extreme mayhem.  However the game is goal oriented and focused on team play (even team building).  Playing with headphones and a mic makes squad communication so much easier.

I played one game where the squad leader was on top of things and gave orders as to what objective we should go after.  Each battlefield (map) has a varying number of objective sites.  It is up to the squad or squads to chose what to attack and how to advance against the opposing force.  It is not simply a game of shoot ‘em up; but rather a game of strategy and reflexes.

As game play continues over time, players level up and acquire new weaponry and rank.   The game includes vehicles, air planes, and I think naval vessels.  Driving a tank is pretty straight forward, though anti tank weapons abound.  The life of a tanker is short, the machine gunner’s life is still shorter.

With more than a passing familiarity with flight simulators and knowing how to fly a plane, I thought I’d give flight a try. That will take much more practice.  I think I’ll need to reverse the standard up/down controls.  I pull up on the stick and head toward the ground.  For now I’ll focus on the infantry with the occasional tank.

This game is unadulterated fun and extremely addictive. It is huge in scope with the promise of significant expansion over time.  I read that the game is “half done”.  Great, well maybe. I’m retired and have lots of time to burn, though my wife will have something to say about it.  At least with headphones she doesn’t hear the sound of battle: no explosions or rattle of small arms fire. 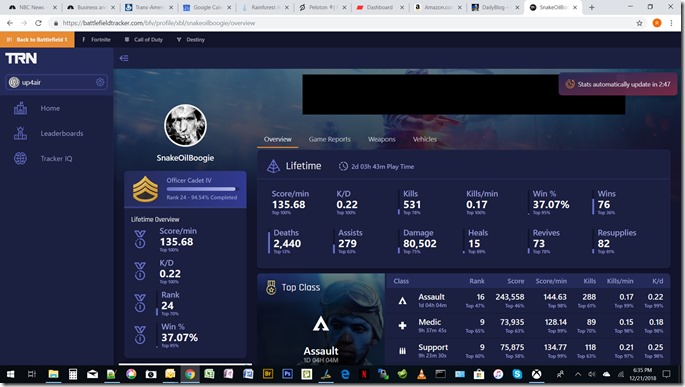 All player statistics are stored on a website.  The stats are public and extremely thorough.  You can check out where you stand relative to your friends and the best of the best.  I’m close to the bottom for now.  When playing I often hear “Too Slow!” as I get shot up.

The game plays in 4K making the terrain and avatars quite life-like.  The game is well done.  I’ve read some griping from players who are upset that women avatars are available, or that the game is focused more on team play.  There’s always someone not happy with change.